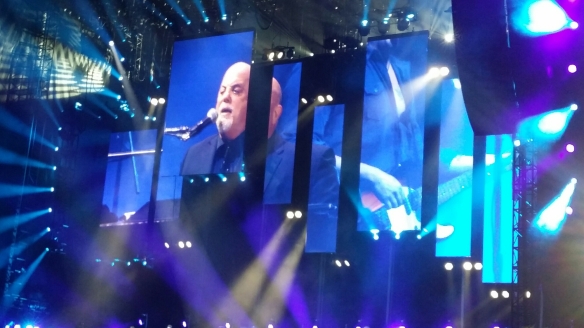 Can I post from WordPress app on my Android phone?

I’m about to find out.

I recommend any / all of these on CD. I bet they sound good on vinyl too. Please support the musicians, songwriters, etc.

If you want to listen to any of these once first before committing to a purchase, you can refer to this Spotify playlist that I created containing these albums: Brian’s Favorite Albums of 2014

2013 was an amazing year for me in terms of concert attendance.  If you include opening acts and individual sets at music festivals, I saw at least 260 set of music on 90 days/nights.  I have attempted to narrow down that list to the 20 or so sets/shows that were the most memorable, most enjoyable, most unique. I gave up on trying to rank them, so have decided to present them chronologically instead, with some brief reviews and links to photos/videos/setlists if you want to find the full details on a particular show.

surprise highlight: Teresa Williams sang “Keep Your Lamp Trimmed And Burning” in a phenomenal vocal performance that no one in the audience was expecting at the time

This was billed as a Dawes performance, but the band did not perform any of their own songs. Instead, they played a few covers and served as the backing band for other singers, who also performed cover songs, for the most part. One exception was Richard Thompson who performed his own song “The Calvary Cross”. It was all very well done even though there was little time for rehearsal before the show.

Yes, cheating to combine all of these as one entry… I saw the trio of Richard Thompson (guitar, vocals), Michael Jerome (drums), Taras Prodaniuk (bass) on multiple occasions this year.   It is difficult to pick one as the “best”. The Cayamo sets were the first times I heard some of the new songs from the Electric album. The BottleRock show was under a small tent and the closest I have been to the stage for a Thompson show. The Monterey show was a full length headlining concert in a theater.

Great set organized by Larry Campbell and featuring the songs of The Band and Levon Helm as performed by the Cayamo all-star cast listed above.

Traveling to Phoenix to attend this was very much a last minute impulse decision. Although this was not as special as their shows in Chicago (which often include extra musicians, dancers, light shows, etc.), Poi Dog Pondering is still one of my favorite bands and all of their shows are enjoyable. See them if you get a chance.

Great band. Great venue. How could it miss? If I was forced to limit this list to a top 5 or top 10, this might not make it, only because of the stiff competition from more unique/memorable experiences listed above/below. But I would definitely recommend checking out this band if you have never seen them.

Unique!  Creative!  Hard to describe their music in words.  Many musicians on stage. Using a bow on a guitar (ala Jimmy Page). Wonderful light show.  I don’t actually remember specific Sigur Ros songs/melodies/lyrics (most of their lyrics are in a made up language anyway), but I was engrossed by the sights and sounds of this concert for one night in April.

The Fillmore, San Francisco;  May 2

What a fun show! And so cool to see so many famous musicians sharing a stage together and performing the songs of Robyn Hitchcock.

I finally saw this band in May. I was supposed to see them on February 1st (as opening act for The Who’s Quadrophenia show in Oakland) but had missed them as I arrived late for that Feb. show.

Glad I got to see them at least once so far. Fun band with a soulful black lead singer/showman fronting white blues-rock musicians.

This band was one of many great acts included in the line-up of this new music festival. Other acts I saw at BottleRock May 9-12 included: Richard Thompson Trio (see above), Violent Femmes, X, Joan Jett and the Blackhearts (see below), Alabama Shakes, Andrew Bird, Jackson Browne, Iron & Wine (see below), Sharon Van Etten, Dwight Yoakam, Carolina Chocolate Drops (see below), Charlie Musselwhite, Mavis Staples, The Secret Sisters, and more.

I also saw the Drops on May 8 at the Mystic Theatre in Petaluma. But I will give a slight edge for this concentrated, energetic festival set on a sunny summer day under a small tent, where I was standing at the front of the audience near the stage and was able to capture some good photos and videos. This was also the last time I got to see the current lineup of the band including the talented and entertaining Don Flemons before he left to pursue a solo career.

My memory of this set has some similarities to what I remember about Sigur Rós in April: many musicians on stage, engaging in the moment, very creative and unique sounds (orchestral? atmospheric? some other adjective?), but where the specific songs/lyrics/melodies were unknown to me and mostly forgotten after the fact.

INSERT ONE PHOTO IN PAGE HERE

I finally saw Isbell in 2013, and he has become a new favorite. I first saw him solo/acoustic, and with his wife Amanda Shires, on the Cayamo cruise in January.  This June date was the first of two shows I saw him do in 2013 with his band the 400 Unit  (the other was a September show in San Fran).  Despite a light attendance for this new Monterey Americana festival, Isbell and his band closed the day with a great rocking set including songs from his daya in the Drive-By Truckers, as well as excellent covers of songs by Neil Young (Like a Hurricane), the Rolling Stones (Can’t You Hear Me Knocking), and Candi Staton (Heart on a String). The show also included a number of songs from Isbell’s solo album Southeastern which topped many critics’ and fans’ lists of the best albums of 2013. A great introduction to one of the best rock/Americana bands out there today. I look forward to seeing this band again in 2014 at The Fillmore and elsewhere.

I probably first heard Joan Jett & The Blackhearts when their version of “I Love Rock ‘n Roll” was became a radio hit in 1982.  But I was only 9-10 years old at the time and not going to concerts yet.

I finally got around to seeing her live in 2013, first at the BottleRock Napa Valley festival in May and then at this full length concert in September.  Although Jett is older now, she can still sing, and entertain, and she still loves to rock ‘n’ roll.  She wore a tight black leather outfit. One of her band members was a younger guy with a punk look including a mohawk. The band was enjoyable both to watch and to hear.  Their show includes a mix of familiar originals and covers (including Crimson & Clover). Check them out for a fun punk/pop/rock show.

This was the first time I had ever been inside the Ryman and part of my first day in Nashville. The Americana music awards are like a smaller version of the Grammy awards. The show was televised on AXS TV and excerpts were shown later in the Austin City Limits time slot on PBS. It was not quite a traditional concert since there were award presentations, acceptance speeches, etc. But there were also 18 songs performed by legends and new favorites. Some of the acts were ones I had seen before on Cayamo back in January (Shovels & Rope, Richard Thompson, Milk Carton Kids, Rodney Crowell) and some I was seeing for the first time even if it was just one song each (Holly Williams, Robert Hunter, John Fullbright, Duane Eddy).  A very unique and memorable evening.

This was one of the showcases the first night of the Americana Music Festival, later the same night as the awards show.  JD McPherson and his band played a mere 43 minutes to a packed Mercy Lounge crowd. I almost didn’t go to this show but was very glad I did. Their style is a throwback to older styles with a mix of 1950s rock-and-roll, rockabilly, ’40s jump blues, etc. Guitar, bass, drums, piano, sax.  Fun band, check them out!!

This free afternoon solo performance took place on a small makeshift stage in the back of a record store, as part of an all day party.  Billy Bragg’s set started with three songs on acoustic guitar (two of the Brit’s recent “Americana” songs and a cover of a Woody Guthrie song, all of which he had been performing a lot recently) before he surprised us and switched to an electric guitar. He proceeded to tear through all seven songs from his debut Life’s A Riot With Spy Vs Spy to celebrate the 30th anniversary of that 1983 album. There aren’t many performers you see perform solo with an electric guitar, but that is the classic Billy Bragg sound which he has gotten away from in recent years.

I had waited since 1999 to see Tom Waits for a second time. When he was added to the Bridge School Benefit, I had to be there. Although Waits’s gruff voice isn’t for everyone, he is a great showman and songwriter, and has worked with some excellent studio and live musicians over the years. This performance included Les Claypool (from Primus) on upright bass and David Hidalgo (from Los Lobos) on guitar and accordion, among other musicians.

Tom Waits was only one part of a full day of the annual benefit show to support the Bridge School run by Neil Young’s wife Pegi Young. Other musical highlights of the day included Jenny Lewis, Heart, Elvis Costello, Crosby Stills Nash Young, My Morning Jacket, and more.

This one-of-a-kind show featured a performance of the entire Temple Beautiful album (Prophet’s best) start to finish, with strings to sweeten the sound in addition to a couple of surprise guest singers.

I had seen Setzer many times before including the Brian Setzer Orchestra Christmas Spectacular once before, 10 years earlier (11/28/2003, 9:30 Club, Washington D.C.). So I knew what to expect and there weren’t a lot of big surprises exactly. The Brian Setzer Orchestra always puts on such a spectacle with the big band of about 16 musicians on stage including multiple saxophones, trumpets, trombones. This night included appearances by The Grinch, Santa Claus, and fake snow. I was also standing very close to the stage. Such a fun way to spend Christmas Eve (even for a lapsed Jew/atheist!!).

Calexico has been one of my favorite bands since I saw first them at the 2008 Newport Folk Festival.  In part I love the combination of trumpet along with usual rock guitar/bass/drums.  Although I had also seen Calexico a few months earlier at Slim’s (and other times over the last 5 years or so), this show was special because it was New Year’s Eve, The Fillmore, included a mariachi group, and more.